After much controversy and suspense, the House Permanent Select Committee on Intelligence finally released the classified 28 pages from the 9/11 Report. They reportedly contained information about the involvement of members of the Saudi government and royal family in assisting the 9/11 hijackers in their activities in the United States. The Kingdom of Saudi Arabia was concerned about releasing this information because it was reportedly unverified and circumstantial.

In fact, the Kingdom reportedly “threatened” to sell off hundreds of billions of dollars in U.S. assets if Congress passed a bill that would allow the families of 9/11 victims to sue Saudi Arabia. Information contained in the 28 pages was said to be vital to that effort. The bill passed the Senate, but it is still in committee at the House, and the Saudis never made good on a threat that was in all likelihood exaggerated. However, the issue brought increased scrutiny to classified 28 pages and on July 15, the House released them to the public (with some redactions).

They are available to download from the House of Representatives website, but the main point seems to be as follows: The hijackers probably had contact with individuals who may have been connected to the Saudi government, but that neither the FBI nor the CIA was able to decisively determine these connections. These individuals were heavily involved in Al-Qaeda networks that operated in religious institutions that also received funding from the Saudi government and royal family. Ultimately, the FBI and CIA could not prove that the Saudi government willingly provided financial assistance to the hijackers. The Joint Inquiry would have liked to investigate these connections independently but did not because it was beyond the scope of the inquiry.

The evidence reveals one source of Saudi government culpability – it did not cooperate or assist the FBI and CIA in their investigations of Osama bin Laden and his network within the United States. They frequently stonewalled American investigators and did not cooperate with requests for information. According to the FBI and CIA, however, this was not a cover-up, but rather, due to the fact that “the Saudis will only act when it is in their self-interest.” 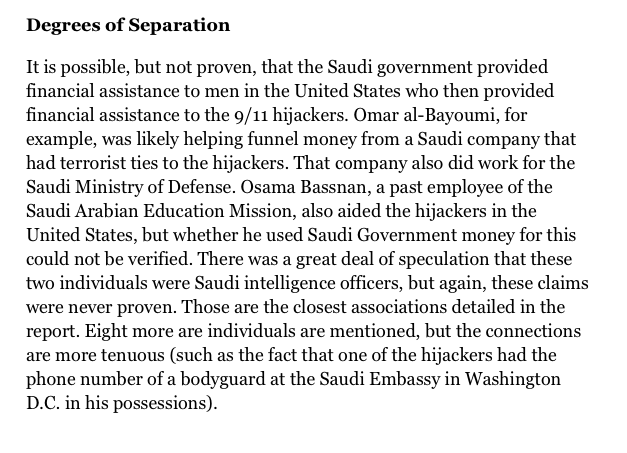