“the tale of a Bedouin family that ruthlessly and shrewdly maneuvered to control a multi-trillion dollar enterprise, it peels back the persistent image of the Saudis as simply religious zealots who do nothing more than drill holes in the ground.” 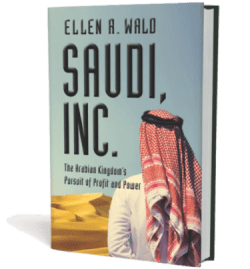 Saudi Aramco is now preparing to launch its much-anticipated IPO, expected to be the largest in history with a possible valuation of up to $2 trillion.  The Kingdom is also embarking on a massive investment in its Vision2030 plan for economic diversification; the rebirth of an economic and diplomatic relationship with the U.S. worth hundreds of billions of dollars in investment in both directions; and preparation by the next generation to take leadership positions in the Kingdom – transforming society, business, and the state.

“Saudi, Inc.” presents the history of Saudi Arabia through the central figure of Aramco, the oil company that brought riches, success, and regional dominance to the ruling family, al Saud.  The story begins with the daring exploits of Abdul Aziz, Saudi Arabia’s founding monarch, and takes readers to the economic and geopolitical intrigues of today.  For over a century, al Saud has sought profit and power through sophisticated maneuverings and prescient partnerships, always with the aim of securing success for the generations to come.

“Ellen Wald has done a masterful job of taking you inside the boardrooms and the royal chambers, the competing interests and personalities. She captures the vast scope of history, from the conquest of King Abdul Aziz to the evolution of the business community over the past 80 years. Wald brings alive the interplay among the al Saud family, the tribes, the religious community and culture, and how they all contributed to the Kingdom’s development. Wald chronicles the skill in which the Saudis outmaneuvered everyone, especially the large U.S. corporate enterprises. A necessary read for all those venturing to the Gulf.”

“The U.S.–Saudi relationship is both critically important to both countries and fraught with contradictions. In this incisive and briskly readable study, Ellen Wald skillfully traces the evolution of that relationship from its earliest days down to the present. Saudi, Inc. is an important and timely book.”