Sunday, April 17 passed without any agreement between the eighteen oil producing nations who gathered in Doha, Qatar to discuss a coordinated freeze in production.  The price of oil rose above $40/barrel last week when the two biggest producers, Russia and Saudi Arabia, seemed optimistic that an agreement would be reached.  But as Sunday grew closer, the tenor changed.  Iran refused to participate in a coordinated production freeze (a position it has maintained since the nuclear deal ended sanctions) and Saudi Arabia responded to Iran’s opposition with their own ultimatum— Iran’s participation was essential to any deal. 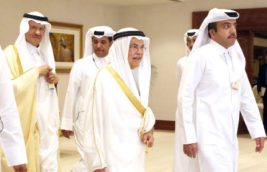 Nevertheless, when representatives arrived they were informed that a preliminary deal was ready to be signed.  On Sunday, the meeting was delayed several hour and finally began without Iran’s oil minister.  It dragged on through the afternoon until finally the parties dispersed without a deal.  Afterwards, both the Russian and Omani representatives said that the deal fell through because Saudi Arabia and other Persian Gulf countries would not commit without pledges from holdouts Iran and Libya.

Now that the Doha talks are finally over, we can finally look beyond the false promises of a production freeze at the following takeaways

1)  Saudi Arabia acted in its best interests.
Deputy Crown Prince Mohammad bin Salman and Oil Minister Ali al-Naimi were very clear before the meeting when they each confirmed that without Iran, Saudi Arabia would not agree to any production freeze.  This has been Saudi Arabia’s position all along, and it is aligned with the country’s strategic interests.  Politically, economically, and strategically, Saudi Arabia had nothing to gain from a production freeze that did not include Iran.  To do so would have hamstrung Saudi production going into the high-demand summer months, provided Iran with a free ride, and simultaneously thrown a lifeline to U.S. shale.  Saudi Arabia’s main priority right now is its own national interests, not those of Venezuela, Russia, and the United States.

2) Iran is politically isolated.
Iran’s oil minister chose not to even attend the meeting, which may have looked stalwart and firm to the Iranian population, but did nothing to help the country’s diplomatic isolation.  Ultimately, the image from Doha will be that Saudi Arabia and Russia brought eighteen producers together but Iran’s recalcitrance torpedoed an agreement.  Meanwhile, Saudi Arabia and others continue to isolate Iran for its continued support of terrorism and destabilizing military activities in Yemen, Syria, and Iraq.  Saudi Arabia is working to build a bulwark of Middle-Eastern nations to contain Iran.  King Salman recently visited Turkey and Egypt and signed diplomatic and economic agreements with leaders there.  Jordan just joined Saudi Arabia and Bahrain in withdrawing its diplomatic contacts from Iran.  Meanwhile, Saudi Arabia continues to pressure Iran by blocking access to the SUMED pipeline and Saudi ports.

3) A freeze is not a cut.
Even though a successful agreement to freeze oil production looked like a step towards ending the global oversupply, it was not.  Had producers agreed not to produce oil in greater quantities than each of them did in January, then Russia, Saudi Arabia, and several other nations would still be on track to produce more oil in 2016 than they did in 2015.  Russia and Iraq both increased oil production immediately ahead of the Doha talks and made statements committing themselves to higher production in 2016.  Whether they would have even adhered to a freeze agreement is questionable, especially considering Russia’s past history of reneging.  Those hoping a freeze agreement might have lead to a cut agreement at OPEC’s next meeting in June would have been sorely disappointed.  Saudi Arabia has remained resolute it its commitment not to cut oil production and given how well its economy had withstood the lower prices for one and a half years, there is no indication the Saudis will change policy now.  In fact, lower oil prices are actually propelling beneficial domestic policy reforms within the Kingdom. Other than desperate nations like Venezuela, there is no across the board incentive to reduce oil production.

4) The global glut is – gradually – resolving anyway.
Now that the deal is dead oil prices are losing their pre-Doha speculative bump.  However, the long-term trend remains on track towards a slow and gradual balancing of supply and demand.  The U.S. fracking industry is in the process of consolidating and new companies declare bankruptcy or announce asset sales every week.  Oil production will decline naturally as more companies leave the market, leaving only the most efficient and financially healthy producers to continue to exploit shale oil at a slower pace.  Demand from China and India continues to grow and will slowly eventually relieve the oil glut.  In the short-term, a developing oil strike in Kuwait cut Kuwait’s oil production in half on Sunday.  Although the parties seem to be working out their problems, supply disruptions from labor disputes, geopolitical events, and environmental issues are always potential short-term price raisers.

5) Venezuela and Russia are still unresolved questions.
Even though Venezuela was a  major force behind the Doha meeting, a freeze agreement would never have raised the price of oil enough to lift Venezuela’s economy out of its current troubles.  The big question is whether OPEC countries will have to play a role in some sort of bailout or if they will let the founding OPEC member’s economy continue to collapse.  On the other side of the world, Russia’s ability to sustain its record high levels of production remains questionable.  Poor infrastructure and aging oil fields could force Russia to suddenly cut production, creating a hole that many producers—Iran and Saudi Arabia first and foremost— would gladly fill.

In truth, the Doha meeting was a distraction from much more compelling issues like growing demand in China and India, the state of Iran’s foreign oil contracts, the role of Aramco in Saudi Arabia’s ambitious economic restructuring, and Saudi Arabia’s recent threat to dump U.S. assets if Congress passes a bill that would allow the Saudis to be held liable for the September 11, 2001 attacks.