As I have just returned from Wyoming, a state known for energy and for bears, we see the two converging in the oil market.

The price of crude oil fell below $40 a barrel yesterday. This nearly 4% loss comes after weeks of slow decline largely due to two factors: the ongoing global crude oil glut and an oversupply of refined products (gasoline, etc.). Earlier in the year, when oil was above $50 a barrel, reports were that the glut was on its way to resolving. It appeared that supply and demand were finally converging, with production disruptions in Nigeria, Canada, Libya, and Venezuela; a substantial but slow decline in shale oil production in the United States; and large crude oil draws by refineries. However, appearances can be deceiving, and these factors failed to remove enough crude oil from the market to make any real dent in the global glut.

There are significant indications that we have not seen the end of this drop:

The Persian Gulf is having one of its hottest summers ever. Temperatures in the region climbed so high gasoline actually boiled inside a car’s fuel tank. This should have been relevant to oil traders, as typically oil prices rise around this time of year in part because of the high electricity usage in the Persian Gulf. Gulf oil producing countries use crude oil for purposes other countries do not, like generating electricity to power the air conditioners that make modern life sustainable there. Because oil consumption in Saudi Arabia, Kuwait, and the UAE usually grows significantly at this time, their exports decline. This year, however, even though Saudi demand increased, its oil production also continued to grow, meaning plenty of oil to export. In addition, Saudi Arabia cut the price of the Arab Light oil it sells to Asia by more than $1 a barrel, driving down prices even more.

Meanwhile, the shale oil companies that survived sub-$30 oil are now flush with cash from new lines of credit and profits from higher oil prices in the spring. They have reopened closed wells, drilled new wells, and are producing strategically to bring in as much revenue as they can. Rig counts in the United States continue to rise slowly, indicating production will continue to grow.

Hedge funds and other speculators no longer think the oil market is going to recover and have made huge bets that it will continue to fall. This herd mentality amplifies the effect that fundamentals already have on the market.

Chinese demand is still a mystery. China continues to import massive amounts of oil – mostly from Saudi Arabia and Russia. 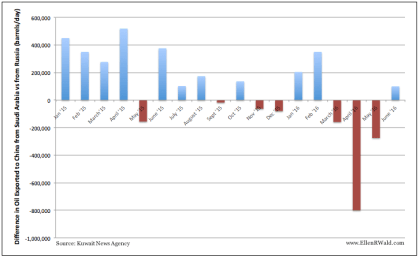 Independent refiners (teapots) are buying and refining crude oil as fast as they can in China, but it seems many are actually turning around and exporting their refined products to neighboring countries. It is also unclear how much crude oil the Chinese government is storing in its strategic reserve rather than refining for immediate domestic consumption. If much of the Chinese imports are for reserves or for resale, China could suddenly cut its imports.

Even though some good analyses indicate that India seems poised to take China’s place as the fastest growing oil consumer, there are important signs that Indian growth might come more slowly than previously expected.